A Brief History of Chocolate 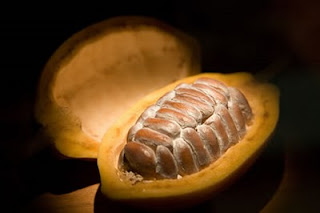 Chocolate is one of the most fascinating of all the foods that South Americans Indians gave to the world. The cacao tree originated in the Americas, probably in the basins of the Orinoco and Amazon Rivers, where most species of cacao are still found. Cacao grows in shady tropical forests protected from the strong sun. Wild Cacao must have spread from Amazonia to other regions and probably was domesticated in Central America. When the Spaniards arrived in what is now Mexico they found the Aztecs using cacao beans to make a drink that was so special that it was served to the emperor in gold goblets. It was believed to be an aphrodisiac, which is why the emperor drunk so much of it. This sweetened drink was made with toasted ground cacao beans, hot or cold water, and spices such as achiote (annatto) or ground hot peppers. It was accessible only to the ruling class and nobility because cacao beans were so expensive (they were, in fact, used as currency by both the Aztecs and the Mayas).

The Name of the drink, Xocoatl, may be related to Quetzalcoatl, who it was believed taught the people how to grow and use cacao. The Nahuatl word for the cacao tree is cuauhcacahuatl. Our word for the processed cacao is chocolate derived from the Aztec xocoatl, which probably meant ‘bitter drink’.
At the begining of the conquest the Spaniards found xocoatl unpalatable. In addition to the fact that it combined cacao with odd spices (and no sugar), it was prepared by beating it to a foamy consistency. By 1591, some Guatemalan women had created tablets that could be dissolved in hot water and sweetened sugar to make a chocolate drink. Only then did the Spaniards take a serious interest in chocolate, and in 1631 they brought some cacao beans to Spain. There they began making elaborate mixtures of cacao beans, sugar, spices, almonds, and hazelnuts, all ground together to make a paste that was eventually exported to others countries in Europe. Even so, it was not until 1928 that C. J. Van Houten developed a process for making cocoa powder for drinks and cacao butter for solid chocolate.
When this sweeten European creation returned to the land of cacao’s birth a few years later , it quckly became a drink of the Andes countries.