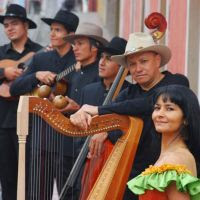 On Thursday 18th March the superb Colombian joropo band Cimarrón are coming to the Union Chapel in Islington. Performers like this bring back memories for me of my upbringing in Colombia, and in particular the diversity of musical and other cultural experiences which we were able to enjoy. I’m delighted to see troupes like Cimarrón coming to the UK and bringing with them their roots and their culture to share with us. Details of the concert may be found here – we are selling tickets in the restaurant.

In my early teens i became a member of a youth group in my home town Quinchia, in the department of Risaralda in the coffee region of Colombia, this group was set up by university students from our town, that having moved to Pereira, our departmental capital to continue the university studies, realised how little was on offer in our town for young people. The Corporacion Quinchia Nueva was set up, first as an study group, and it developed into a cultural organisation, in the absence of an official cultural organisation in the town. It consisted of various groups, such as sports teams, theatre, band and a dance troupe that was the most successful of the lot. By winning departmental folk dance championships and touring all around the country, this troupe developed to the point that it became the Ballet Michua, the official ballet company of the department of Risaralda. Folk dance had offered me a fantastic outlet in my youth, by learning about the different cultural regions of the country, and offering the opportunity of travel and broadening my horizon. Like the CQN there are many cultural organisations in Colombia, teaching young people about their roots, their communities and most importantly being an active part of the community.

Cimarrón is a seven-piece with spectacular, super-tight performances of joropo music and dance. Hailing from the vast Orinoco plains which stretch from Colombia into Venezuela, joropo is a fast traditional rhythm played on harp, bandola and cuatro accompanied by bass, cajon and maracas. Cimarrón fire up flawless virtuosity with a heart-stopping sense of drama.

Led by harpist Carlos Rojas and based in Colombia, Cimarrón have been experimenting with the music of their homeland for the past two decades, on the search for new musical horizons whilst staying true to their roots.

The mestizo people who inhabit the llanos [plains] on the great Orinoco river are descendants of Spanish settlers, African slaves and Indigenous Indians. This is cattle rearing country where life revolves around country ranches. Music accompanies the daily working tasks such as milking and cattle drives. The word Cimarrón, meaning wild bull, is a symbol of liberty in Los Llanos.

Find out more at http://www.astarmusic.co.uk/?page_id=15 or download their mp3 EP from Amazon.