If there was one th 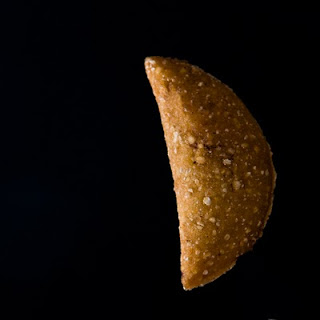 eme which might bring war to Latin America, maybe it would be not football, not global warming, not border disputes, nor the disagreements between Chavez, Uribe and Correa – but the humble empanada.

The empanada can be (and at times has been) the subject of many debates and discussions about which is the best, the most original, the most ancient and most tasty. At the same time, this very dish is one of the elements which demonstrate that, despite borders and differences of names and accents, Latin America is a single entity. 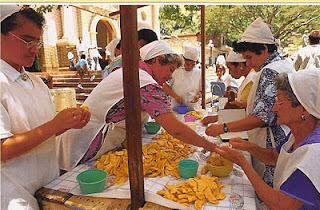 The paisa, saltena, tucumana, llaucha, pucacapa, pastel frito, empanada argentina, pomonha – it doesn’t matter where it’s eaten, the pastry which
wraps and covers the filling, the secret heart of the empanada, the mix of flavours and the delicacy of the pastry is the same. The ritual of eating it and discovering its entrails is the same as that which allows humanity to discover the world and surprise itself with the true heart of things.
Empanadas in the Middle East
The most ancient references to the empanada are to be found in the very cradle of our civilisation. It’s known that a dish very similar to the empanada was enjoyed in Persia centuries before the birth of Christ. Also, ancient Greece was know for its cereal-based pastries which were exported all over the Western world, including Armenia, Morroco and eventually Latin America.

Empanadas in Spain
In Spain, what originally considered an Arabic dish was eventually converted into a popular dish enjoyed by the general public. The delicate and individual Arabic empanada turned into the empanada gallega (Galician empanada), a dish of soft pastry filled with meat or fish.
Many Galicians came to America and brought with them their gods, their fiestas, their religious processions, their traditional dances, their language, their sins and of course their food. In this way, the empanada finally came to America, coming together with local produce and new forms of preparation to create something new and different, uniting what had existed before the arrival of the boats, and all that occurred afterwards.
The Empanada in the UK

The Cornish pasty is a pasty typical of the county of Cornwall, which despite having a history in a country far from those referred to above, has ended up being very similar. This dish has been known in the UK since the twelfth century, and is considered native to Cornwall, however in the present day the filling is typically of beef, onion (native to the Middle East) and potato (native to the Americas). At times though Cornish pasties have been produced with a surprising variety of sweet and savoury products – and sometimes both together.
In summary, the history of empanadas transcends national boundaries and the ages. At Sabor we always have them on our menu, sometimes to a traditional recipe and at other times using recipes which are uniquely our own, so as to prolong their appeal. Generally wheat flour is used, whilst in countries like Colombia, Venezuela and Ecuador the pastry is made with cornmeal, which makes them more crunchy, and in the Caribbean they are sometimes made with a black bean pastry. 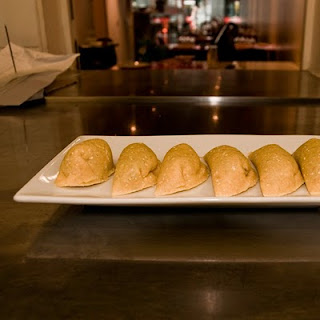 Generally empanadas are accompanied by a sauce which may be a little hot or spicy, e.g. Colombian aji, which is a mix of tomato, onion, coriander, garlic, vinegar, lemon juice and salt, which gives us a very tasty mix of flavours.
If you would like to share your favourite empanada recipe, you can send it to me at info@sabor.co.uk. If we use your material we would like to invite you for a free dinner for two with cocktails and wine.