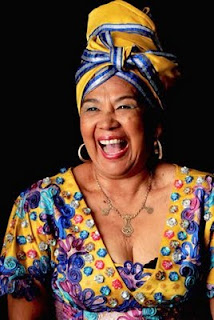 Our owner/manager and many of the staff and customers of Sabor are long-term fans of Totó La Momposina, and are thrilled that she’s coming to London to perform at Cargo in Shoreditch on Wednesday 16th September. Totó La Momposina is a Colombian Singer who has dedicated herself to preserving the music of the Caribbean coast of Colombian, which is a heavily rhythmic hybrid of Spanish, native South American, and Afro-Cuban influences. As such it mirrors what happened during the Spanish colonization of the Americas. Many rhythms were born from this fusion, of which gaita, cumbia, porro, chalupa and mapale are perhaps the most representative. Totó herself is often referred to as ‘The Queen of Cumbia’. She mastered the different styles and rhythmic variations of the Colombian Caribbean so well that she was invited to perform at the 1982 Nobel Prize ceremony for eminent novelist Gabriel Garcia Marquez – another native of the region.
La Momposina was born in the village of Talaigua, on the island of Mompos, located in the Magdalena River near Colombia’s northern (Caribbean) coast. Not only was her family musical (her parents were fourth-generation musicians, her father a drummer, her mother a singer and dancer), but her village was blessed with the presence of Ramona Ruiz, a skilled, veteran cantadora (female peasant singer) who helped train La Momposina in her teenage years.
La Momposina traveled up and down the Colombian coast, learning as much music and dance as she could — from village celebrations to the common, everyday songs sung as accompaniment to daily labor. During this extended research period, La Momposina was honing her vocal and performance skills as well, discovering a rich power in her voice that soon made her extremely popular locally. In 1968 sbe formed her own band, continuing to perform at smaller local functions but now also expanding her horizons in hopes of building a professional career. Word of her vocal prowess spread quickly, and by the ’70s, she had begun making international appearances, touring Europe and most of the Western Hemisphere.
In 1982, after performing at the Nobel Prize ceremony for Garcia Marquez, she left to spend four years in Paris studying the history of dance at the Sorbonne. During this time, La Momposina recorded her first album, 1985’s Totó La Momposina Y Sus Tambores. She returned to Colombia in 1987, reconnecting with her roots by touring in the more immediate region, and also traveled to Cuba for further musical study. In 1991, La Momposina was invited to join Peter Gabriel’s WOMAD concert festival; she toured the world once again, and subsequently recorded a second album for Gabriel’s Real World label. La Candela Viva was released in 1993 to much acclaim, and helped put La Momposina in great demand at music festivals around the world. The follow-up album, Carmelina, appeared in Europe in 1996. She continued to perform across the globe, now incorporating her grandchildren, as well as her children, into her large performing troupe and elaborate stage show. Her fourth album, Pacanto, was released in 2000.Her latest U.S. release, Carmelina, originally released in Europe in 1996, is a showcase of how tradition can stay vitally alive.
“The traditional music I sing is what’s been in my own family for generations and generations,” she explained. “These days a lot of people have forgotten about traditional music, especially in Colombia. They want what’s now. But you have to remember the past.”