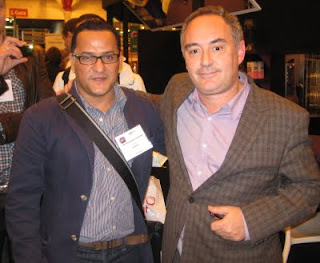 Last Monday I went to the Restaurant Show with Rafi and Daz, Sabor head chef and one of his team. Without a doubt the highlight for us was to listen to Ferran Adria, head chef of “El Bulli”, which is widely considered the best restaurant in the world (voted as such by the judging panel of Restaurant magazine for the last three years). He was interviewd by the editor of Restaurant magazine, and was there to promote his new book A Day at El Bulli. With the first question the man was off like a rocket to share with us his passion.

There is no easy way to explain the food of Ferran Adria at El Bulli. You need to eat there and that’s difficult because his 50 seat restaurant, a two hour drive north of Barcelona in Spain, only takes 8,000 people a year and two million apply for places. Most of us simply won’t make it there, not even by having a personal plea to the man himself.
If you’ve ever wondered why so many restaurants now offer dozens of courses in degustation, it is Adria’s influence. If you wonder why chefs are serving ingredients foraged from the seashore – or spices from Africa or flavours from South America that you’ve never heard of – it is because he started searching for new ingredients and combinations.
It was Adria who first used seaweed extracts to make flavoured, wispy foams, or synthesized spheres of flavour – for instance olive oil balls that taste of the pure essence of olive and that look like olives themselves. He started cooking – or freezing really – in liquid nitrogen at -196°C. He started deconstructing dishes and presenting food as works of art.
Speaking in Spanish through a translator, which was great for me as I did not want to have anything lost in translation, he says that for him “creativity is not copying”. What he is interested in is the food and making diners happy rather than business. That is the course he decided to follow in 1994, ten years after he joined El Bulli. It was then that he broke out of the mould of traditional French haute cuisine, established by great chefs such as Auguste Escoffier and Antoine Carême before him.
Ferran Adria’s work is labour intensive. He says that in western developed countries it won’t be economic to develop avant-garde, high-end cuisine. The manpower required is enormous. Adria has 70 people working in his restaurant to serve just 50 people each night. He said that El Bulli is not a profitable enterprise. It is supported by a range of spin-off businesses and consultancies that in his own words ‘bought the freedom for him, to be able to do what he does at El Bulli.
Without a doubt he is the most inspiring person I have come across in the food industry and listening to his philosophy and experiences was a very enlightening experience.